Aside from having something to say, the first thing you need to start podcasting is a microphone. Here are some tips for choosing the right microphone for your podcast.

When choosing a mic for podcasting, one of the first things you'll want to think about is the pick-up pattern. Omnidirectional microphones pick-up sound more or less equally in 360 degrees. Cardioid mics, on the other hand, pick up sound in a heart shape rather than in a sphere; they register what is front of the mic and a little bit of the sides, and ignore sounds at the back. 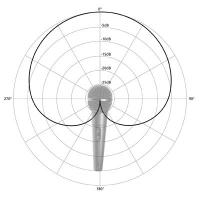 Cardioid mics are great for capturing the voice of the person speaking into the mic without picking up as much noise from the environment. If your podcast is mostly just one person talking, a cardioid pattern will probably work the best. If your show has an interview format, you will probably want two cardioid microphones—one for the interviewer and one for the guest (more on this approach later).

Using a single mic this way can make editing a bit tricky, though, because you are recording both speakers to a single track. This means, for example, that if one speaker is loud and the other is soft-spoken, you can't separately adjust the volume for each the way you can when they each have separate tracks. Still, if you're on a budget, aren't striving for perfection, or just don't want to have to edit multiple tracks, a single omni-mic may work just fine for interviews or shows with multiple hosts.

Non-USB or "analog" microphones are not designed to be plugged directly into your computer, so they require another piece of hardware, called a pre-amp, to get all that analog goodness into a digital device. A good pre-amp will amplify the signal coming from the mic (making it louder) and also take the processing load off your computer by converting the analog data to digital.

I like non-USB mics because they're more versatile. You can plug them into a traditional sound system (if you have a band, for example, or want to plug your mic into a traditional analog mixer). You can also plug them into a digital device using a converter/pre-amp. Using a pre-amp also has the advantage of amplifying the signal. The most important thing in determining the quality of the sound you deliver to your listeners is how accurately and fully the sound coming in was recorded. In my limited experience, I've found USB mics to be a bit under-powered, resulting in a thinner sound. This concerns me, because, from an editing perspective, I would much rather bring the volume down on a strong, clear signal than risk distorting a weaker one by artificially boosting it in my editing program.

So, What Should I Buy To Get Started?

If you're looking for something inexpensive to get you started, I'd give Blue Microphone's Snowball USB Microphone

a try. Prices vary, but you should be able to find one for $65-$100. The snowball is a USB mic that allows you to go from 360 degree omnidirectional to the heart-shaped cardoid pick-up pattern just by flipping a switch. It's plug-n-play on either a Mac or a PC, so there's no driver or software installation. The stand it comes with is adequate, if a little short. If you're worried about vibration from the stand affecting the sound, you can place the snowball in a Ringer Universal Shockmount

. Plus, both the mic and the shock mount just look cool.

The AT2020 is a step up in sound quality from the Snowball—voices sound fuller, warmer, and closer. Unlike the Snowball, however, it only has one setting—cardioid. Still, that's the only setting you need if your podcast consists of only one person speaking at a time. A pair of these is a great setup for interviewing, with each speaker getting his/her own track. It's available as a USB Mic

or as an analog mic

There are, of course, hundreds of other choices, but If you're just starting out, either one one of these will get you up and running without emptying your wallet.

Microphones don't always come with stands, but these are not expensive. If you have the room in your recording space (i.e., you're not recording in your closet), you may want to go with something like the 7701B Tripod Boom Stand

. With a boom stand, you can easily adjust the position of the mic as needed. If you want to save space or want something you can put up and break down quickly, I'd recommend something like the DS7200B Adjustable Desk Microphone Stand

To prevent vibrations affecting the sound, a microphone attached to either of these stands could benefit from a shock mount, like the Samson SP01 Shockmount Spider Mount for Condenser Mics

If you're using any mic for voice work, you're going to want a pop filter. "Pops" are harsh sounds produced by air hitting the microphone when a speaker makes a sharp "P," "T," or "S" sound. This little filter, usually made of nylon, goes in front of the mic and protects it from the fast-moving air. The result is a recording free of those annoying "pops."

Finally, you can't know if you're getting good sound if you can't hear it. You probably already have headphones that will give you a basic sense of this, but you may want to get some studio headphones like the Audio-Technica ATH-M30 Professional Headphones

Working with An Analog Mic

One thing to remember about working with a condenser mic like the AT2020 analog mic is that it needs a little bit of power, called "phantom power," to work. Since it is not connected to your computer through a USB cable, it has to get that power from somewhere else. Also, this kind of mic connects to other audio components by means of an XLR Cable, which you can't plug directly into your computer.

If you're only using one analog condenser mic at a time, there's an elegant solution. You can get a device like the Blue Icicle

that plugs into a USB port in your computer on one end and into your analog microphone on the other. It provides the phantom power the microphone needs to operate and also amplifies the signal, allowing you to get a bigger sound from your mic.

If you're feeling ambitious and want to try a dual-analog mic setup for a show with two hosts or an interview, you can use a device like the M-Audio MobilePre

. It works like the Blue Icicle, but alows you to plug in two analog microphones (with XLR cables) and provides power to them both from your computer. This allows for multi-track recording—each microphone lays down its own track, which can then be edited independently.

To learn more about starting your podcast and the gear involved, check out this course from Lynda.com: Podcast and Videocast Essential Training.